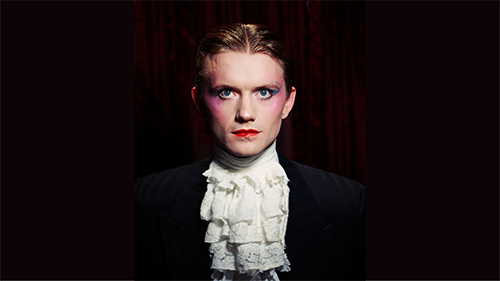 Chris Burgess grew up in Naarm, Melbourne and from an early age aspired to be in musicals as his mum took him to every show that came through. He even has a closet full of programs and ticket stubs to prove it.

Chris Burgess grew up in Naarm, Melbourne and from an early age aspired to be in musicals as his mum took him to every show that came through. He even has a closet full of programs and ticket stubs to prove it. Chris said early influences were his school teachers, namely a Ms Gore who encouraged him to audition for his first musical, Children of Eden by Stephen Schwartz (Wicked, Pippin, Godspell). Chris chatted with Donna Kelly.

Donna: When did you get into being an entertainer?
Chris: When I graduated school, I studied music theatre at Showfit in 2016 and then went on to further my training at the VCA where I studied a Bachelor of Fine Arts in music theatre. I loved training as my peers really became my family, but a family of people who were all uniquely obsessed with music theatre – which can be intense at times. Beyond the training, I was always someone who enjoyed making people laugh and entertaining.

Donna: You have a show LENNOX: Legend In My Living Room coming up…
Chris: Over the past few years, I started listening to Annie Lennox’s music more than ever. The lyrics painted such a beautiful world to escape into from the realities of lockdown and the songs are so anthemic that they dropped me down into my body in such a visceral way. They really helped me through what was a challenging few years of uncertainty…. also she’s just an epic singer and someone who really lives by a strong set of values and isn’t afraid to speak up and rebel. Her music makes great sense in a theatrical setting too as her music videos have such iconic costumes that I couldn’t resist trying to replicate them on stage.

Donna: What can audiences expect from your show at The Palais on July 2?
Chris: A queer, dystopian solo cabaret featuring the music of Lennox and her iconic costumes. I play a host of characters from her maid to her erotic lover and wear a bunch of iconic costumes from her video clips to live gigs. The show also features an epic two-piece band with Imogen Cygler on keys, synth and violin and Ash Griffin on guitar.
This is not a typical tribute show as Annie is not a typical rock star. I share personal reflections of the last few years, some poetry and dive into some fanciful characters, each haunted by ghosts of the society we live in. In this show, I aim to subvert expectations and suspend disbelief through an intimate explosion of Lennox’s music…you gotta see it to believe it

Donna: How did you cope over lockdowns?
Chris: Coping in the contemporary Australian arts industry is certainly an uphill battle, which is reflected in the deeply concerning mental health of the sector. This was exacerbated over the last few years, and I feel we have a lot of healing to do as artists coming out the other side. Having said that, it is inspiring to see the industry come alive again recently and I’m hopeful looking to the future. A silver lining for me is that it gave me time to reflect on what kind of career I want to have as an artist which is something I wouldn’t have had if I had gone straight into shows.

Donna: This is our travel edition, so give our region a plug if you don’t mind.
Chris: I recently visited the area for my brother’s wedding, which was held at my now sister-in-law’s family wine estate – Red Hare. It’s such a gorgeous little pocket of Victoria, particularly for the beautiful nature around here. I also love that it’s the official LGBTI capital of regional Victoria. It certainly has it all.

Donna: What’s next on the agenda?
Chris: I’m planning on touring LENNOX on the interstate festival circuit so keep your eyes peeled for that. I’m also in the process of writing a new show and forming a theatre company so lots happening. Stay up to date on my Instagram, but if you’re really committed, I also teach yoga for anyone who is physically or spiritually inclined!