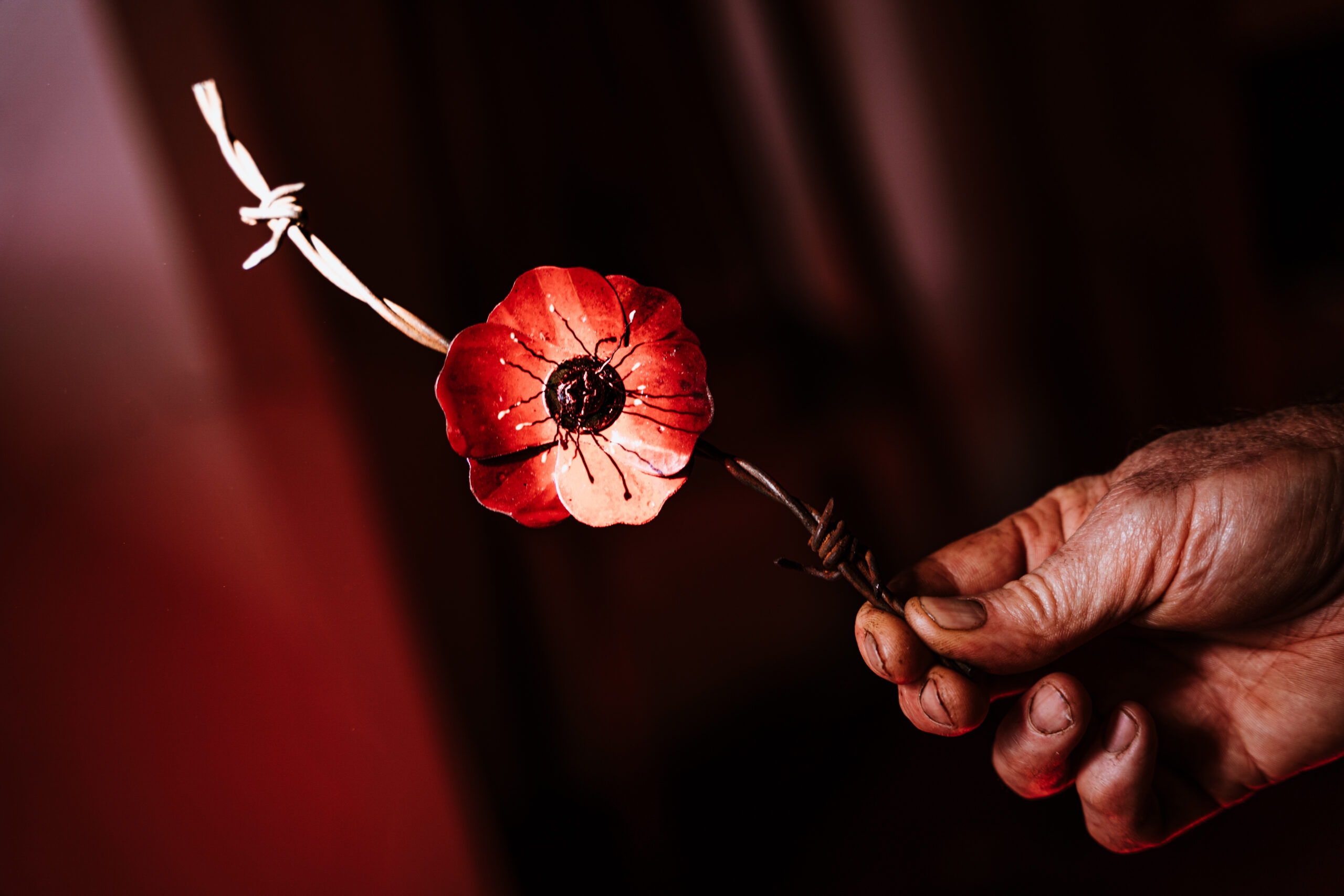 April 11th, 2021A century on, a dinkum digger’s medals glisten

ALF Morrison of Yandoit was two months short of his 21st birthday when a bullet cut him down. Now, 104 years later, his nephew, 89-year-old Don Morrison, plans to wear replicas of Alf’s medals at the Anzac Day service in Daylesford. The two medals shine brilliantly on Don’s chest as he talks in his Yandoit home, with its glorious views of the countryside, including Mt Franklin.

To say this is Morrison country is an understatement. The rough old road to the house bears the family name. The Morrisons got 80 hectares for dairy farming in the first land ballot of 1856.
In his hand Don holds a strand of barbed wire. Mounted on it is a permanent replica of the Flanders Poppy, made by Robert, one of his two sons, which will go on the family grave in Franklinford Cemetery in memory of Alf. The barbed wire represents Alf’s farming background and the brutality of war.

The world in which Alf grew up is caught in the book Letters Home, edited by another uncle, the late Geoff Morrison. The letters, bound in red ribbon, had been in the hands of three family members.
They show a world in which Alf and his brother Edgar, three years younger, roam the countryside, read and made up stories and games. Elder brother Frank was away working.
In winter the pair would sometimes copy stories and even invented their own motto, in Latin, “They were never idle”.
At 15, Alf was off picking grapes. Then he moved to general farm work, buying a rifle to shoot rabbits. A crack shot, he later pinged a hole in his grandparents’ metal weathervane, made by Yandoit blacksmith and store owner, George Fleischer. The weathervane was called Butzbach, from a town in the grandparents’ homeland, Germany. It was a savage blow when a WWI German bullet killed their grandson.

Alf wrote home from Glenlyon where he was milking, then from Ballarat, Kyabram and Macorna, a hamlet 22kms from Kerang.
Macorna, he records, played Kerang. “…the game was terribly fierce. Chas came home with two black eyes and he has to preach today. One of the Kerang men lost his temper and let him have both of them gratis…four Kerang girls were trying to polish off a Kerang barracker, also a girl and Taylor was trying to defend her while one of the Kerang girls gave him five or six uppercuts…”
By January 1915 Alf is reading in The Argus newspaper about the Light Horse and had “a great craving” to join up, which he did the next year.
In camp at Castlemaine he was happy when bugles arrived to replace cowbells.
Alf is away when he and two other soldiers are farewelled at Franklinford with a social and reception, the evening ending with “For they are jolly good fellows”, Rule Britannia and the National Anthem.
By December 1916 he is in London watching some bewhiskered warriors just out of the trenches “a shrapnel helmet strapped on their pack and one or two with a German helmet as well”. On Salisbury Plains he meets a bloke from Macorna.

He has no complaints about the food: “Porridge, sausages and bacon for brek., soup and roasts for dinner, stew occasionally for tea, margarine and jam, or Golden Syrup and sometimes pudding.”
Three days before Christmas he is in France where everyone is “anxious to do the dinkum thing”. The habit was to write your native town on your hatband for others from the district to see. Alf wrote Macorna.
Bravery medals are handed out at a parade. One of his mates is killed. “How little we thought of such a thing when the three of us left Port Melb.”
By March guns “are doing their best to break what windows are left” while he sleeps in a dugout “about the size of a kerosene case”.
May sees him in Belgium watching “a complete stomacher” when a German plane is shot down after a dogfight. “No need to buy Deadwood Dicks for thrillers here anyway.”
His final letter is dated May 17, 1917. “Everything looks beautifully fresh and green,” he writes, “and all sorts of garden flowers are sprouting up like grass…in spite of everything we always knock out a happy existence between ourselves and can always manage to laugh and joke over our hardships and disappointments.”
A letter sent by Alf’s mother from Clunes a fortnight later was returned.
He died on Messines Ridge on the Western Front, held by the Germans for almost three years. In the early hours of the day before his death explosions erupted from 19 huge tunnels dug over two years under German positions. The noise was heard as far away as England. An estimated 10,000 Germans died.
Anzac troops and the British attacked, with the loss of 7000 Australians and 5000 New Zealanders among the 26,000 casualties.

The victory after the week-long battle, possibly Alf’s first, is seen as one badly needed and a vivid if bloody example of the result of meticulous planning.
Back in Yandoit, Don Morrison tells of the devastation the death brought to Alf’s mother and the family.
Missing in the letters is any account of Alf’s four days absent without leave. Don believes he slipped away to Scotland to look once at his family’s old hometown in Aberdeenshire.
A happy aspect of this story is the speed at which the replica medals were obtained, something that Don attributes to Trish Tinetti, unofficial secretary to her husband, Daylesford RSL president Ian.
The original medals were somehow lost with the passing of the years and the fact that replicas could be obtained only became known during a chance conversation Don’s wife Joan had with a relative recently.