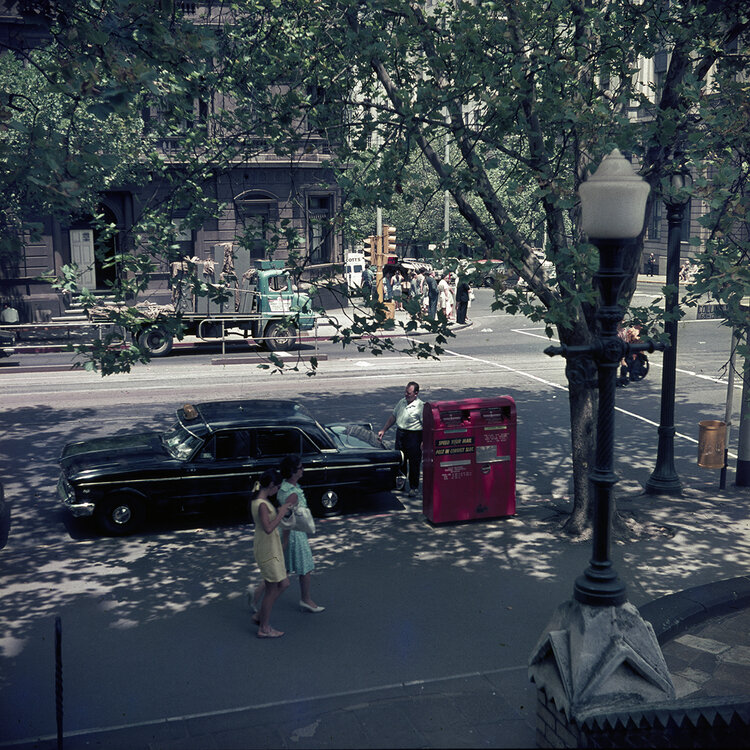 February 27th, 2021A chance meeting, friendship and a time to shine

ANGUS O’Callaghan always dreamed of becoming a famous photographer. Fascinated by people going about their daily lives, Angus captured shots of Melbourne. Shots that evoke memories for those who lived or visited Melbourne in the 60s.

Angus commenced his career as a photographer during World War II, documenting the devastation in Syria. After the war, Angus returned to civilian life, working as a school teacher. But he had a fascination for photography and began capturing Melbourne in a series of works between1969 and 1971 with two medium-format Yashicaflex twin lens cameras, one for black and white and one for colour.

For years fame escaped the now 98-year-old as he tried to navigate the exclusive art clique. He tried to manage his own affairs to no avail. Throughout all this, he never gave up on his dream.
Nor did his wife Lynette. The couple met in Kyneton and lived in the township for a number of years in the late nineties. Escaping the cold, they eventually moved to Queensland before returning to live in Melbourne.
It was Lynette who, after finding a collection of negatives hidden away in the attic over 10 years ago, encouraged Angus to follow the dream that escaped him for all of those years. Lynette had one of the prints framed and donated it to a Brighton Primary School fundraiser.
It was sold for a great deal of money. There were art connections at the school fare who went on to represent Angus through a well-known auction house. But Angus likes autonomy and he soon discovered the partnership wasn’t quite panning out.

Fast track a few years and enter Kyneton’s Genevieve Wearne, owner of boutique accommodation provider, Flop House.
Genevieve and her husband moved from busy Northcote to the serenity of Kyneton in 2010. Genevieve was a CEO of a government-appointed advisory board but a building debacle on her property was the catalyst for testing the waters in the picturesque township.
“We decided to rent for six months to get a feel for the area and for the first three years I was commuting to Melbourne. The days were long and at that time my health was suffering so I decided to take a year off and work out what I really wanted to do, connect with the area and reflect.”
Genevieve has a background in arts, business management and events and wanted to reflect her skills and passions in a new venture. Flop House in Kyneton was born in 2013 which saw a number of boutique and luxurious local guest houses managed by Genevieve. And this is where Angus comes into the picture. Genevieve attended an art exhibition in Kyneton three years ago featuring the then 95-year old’s photographs.

“Angus and Lynette were running late and when they did arrive, as Lynette was about to sit down, someone took her chair. I quickly found another chair and stayed with the couple chatting. I ended up buying two of the photographs and displayed them in our retail space,” she said.
“I had so many enquiries and when I made contact with Angus, he remembered me for being kind to Lynette. Our relationship and our trust grew and since then it has evolved to me representing Angus and his works. His photographs resonate with people’s memories from that period of time in Melbourne. The baby boomers particularly have a connection to his works and what Melbourne was really like then.”
Angus’s work was showcased in 2018 and Genevieve said the response from the community and those visiting the Kyneton area was amazing.
“We sold a lot of work and have since gone on to sell his photographs to interstate and overseas buyers. It was wonderful that we could hold an exhibition in Kyneton given he still has many friends in the area and that is where he met Lynette. He has a very strong connection to the area.”
Angus’s works have been exhibited across the country including in Melbourne and Daylesford and his dream of having his works showcased in a book, Angus O’Callaghan’s Melbourne has also been realised. Angus will soon also meet one of the subjects from a photo he took all those years ago at the then baby’s christening.
*The Local didn’t get a chance to speak to Angus but that’s where he trusts Genevieve to handle all the business that goes with being recognised and being in demand.