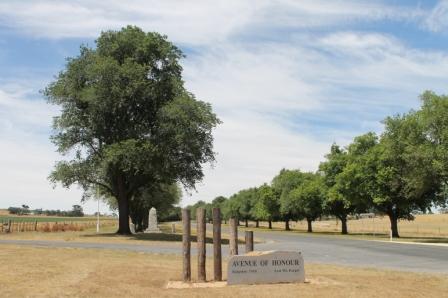 February 15th, 2022Avenue may be overshadowed by AusNet

IN AUSTRALIA , Avenues of Honour are a ubiquitous feature of the landscape. Planted to commemorate those who fought and died in theatres of war, particularly WWI, there are 547 known Avenues of Honour in the country with over half of them in Victoria.

IN AUSTRALIA , Avenues of Honour are a ubiquitous feature of the landscape. Planted to commemorate those who fought and died in theatres of war, particularly WWI, there are 547 known Avenues of Honour in the country with over half of them in Victoria.
While many are overgrown or patchy, in the small hamlet of Kingston, north east of Creswick, the column of Dutch elms stretching for nearly three kilometres, retains its original character. All thanks, in no small part, to the work of the members of the Kingston Friends of the Avenue.
Over a period from August 1918 to 1919, 286 trees were planted by the local community to commemorate the WWI service of 272 men, nine women and five unknowns who lived in the former Shire of Creswick. Kingston, as the geographical centre of the region and the location of the council chambers, was selected as the location for the Avenue of Honour.
However, as was the fate of many such avenues across the state, the site fell into disrepair. Over the years the effects of time and weather took their toll. Cattle and sheep were allowed to graze around the trees damaging the roots and allowing suckers to emerge. Many of the original plaques identifying the service men and women fell off, got broken and were lost.
But in 1999 a Kingston Friends of the Avenue group was formed to protect and preserve the place. Very soon people came together to tend to some long overdue maintenance and replace dead trees. While the original Friends of the Avenue dissolved in 2000, the group was reformed in 2014 and has been active ever since, as president Julie Baulch, pictured, explains:
“The present state of the Avenue of Honour, which secured Victorian Heritage listing in 2015, has come about primarily due to the hard work and dedication of a small number of people who have given freely of their time, energy and expertise through working bees, fundraising and grant applications.
“Most recently we commissioned a professional arborist to produce a tree management plan as part of a larger conservation initiative which also covers the name plaques and other historic infrastructure. It is being developed for submission to Hepburn Shire Council and also to access Heritage Victoria funding. Such efforts are to ensure the upkeep of the site in perpetuity on behalf of the families of those who served.”
Rural Avenues of Honour are often charged with an ethereal significance obscured in built-up areas. Aside from major city monuments, the pace of development of suburbs surrounding such historic sites can often diminish the resonance of memory imbued in each tree. But in Kingston, despite the fact it has been over 100 years since the avenue was established, many descendants remain in the area and the country has hardly changed since those young people answered the call so long ago.
This is the principal reason why the proposed AusNet towers development is such a cause for dismay in the village despite the fact the planned route does not directly impact the avenue itself.
“After many years putting in the effort to restore and maintain our Avenue of Honour, suddenly we have the prospect of 85 metre high towers disrupting this historical landscape. We would like to see the entire project go back to the drawing board and put a greater consideration to undergrounding along current easements outside the boundaries of private farming land.”

The next step in putting the brakes on the development for the residents of Kingston is a public meeting on March 6 at the Kingston Showgrounds. The meeting will provide an important opportunity for coordinating a community reply to the Western Victoria Transmission Network Project Environmental Effects Statement to be released in May. The meeting will also include an update from Stop AusNet’s Towers with input expected from community representatives and local politicians.
Without a concerted and strong response to the AusNet-authored environmental effects statement, it remains a real possibility that high voltage towers will become the dominant presence over the region; substituting the ghosts of those immortalised for generations on the Kingston Avenue of Honour.