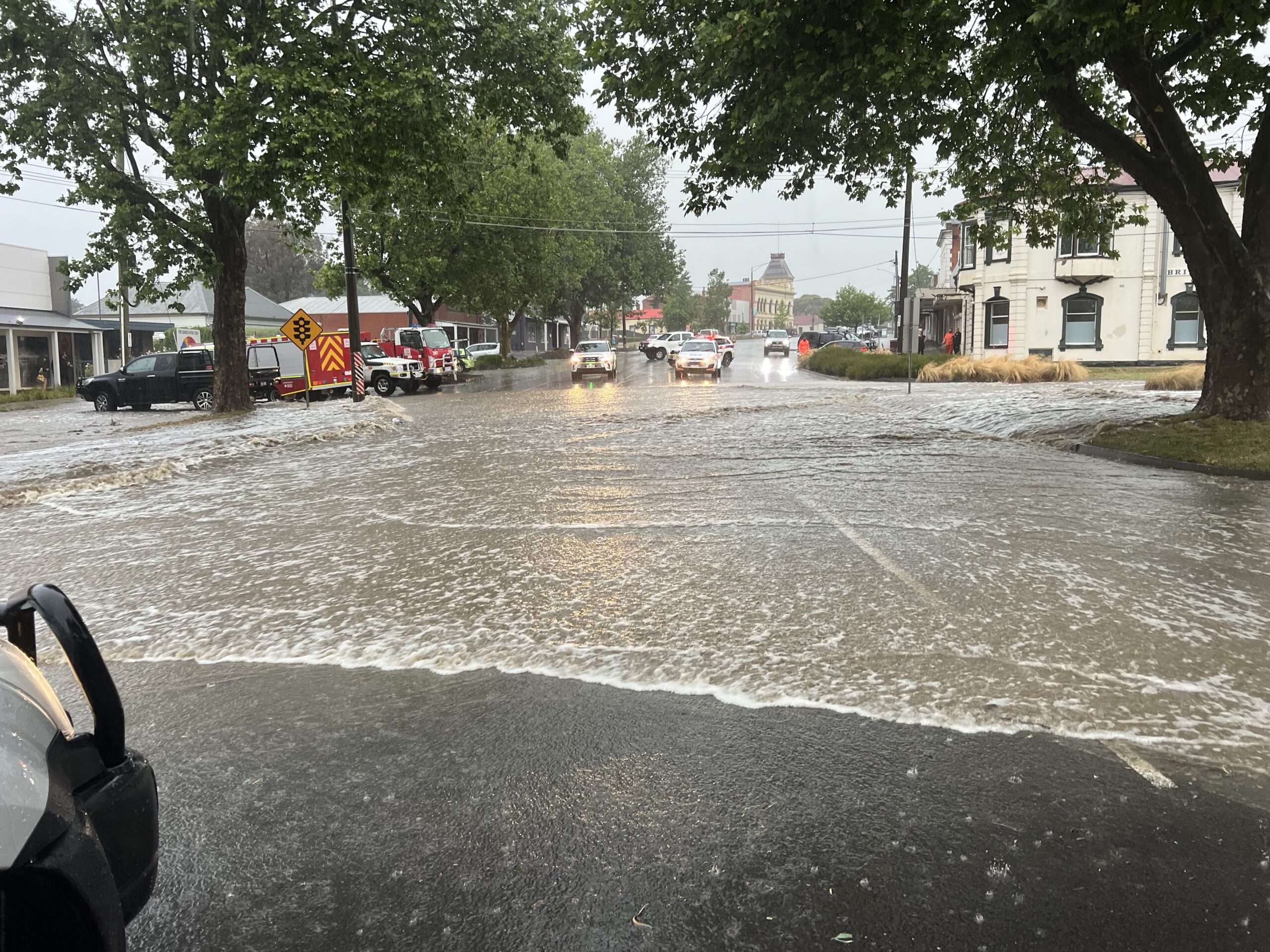 FEAR and dissatisfaction continue to affect Creswick residents five months after the January 6 storm.
Despite assurances from Hepburn Shire Council, major work remains to be done to protect the town from increasingly common flooding events. Forty-four residents remain displaced.
This is all due to damage inflicted by the supercell storm dumping over 160 millimetres of rain and hail on the area within two and a half hours.
In lower areas off Albert Street the drainage system quickly reached capacity. Flood waters spilled out into the adjoining street leaving houses, cars, sheds and caravans under more than 60cm of fast moving water. It was the fourth significant flood in the town since 2010.
“I was home when the water started building up,” says property owner Ron Head. “I got the wife out of the house first because we have been flooded a couple of times before. I then went back and tried to save what I could including my caravan but unfortunately it got too much water in it and I lost it as well.”
In the aftermath, their insurance provider put them up in a hotel in Ballarat. And then they were lucky enough to secure a rental back in Creswick while the necessary repairs were being done on their home.
“I feel reasonably lucky to be able to rent a house,” he says. “There are others a lot worse off than us, living in caravans and having all sorts of trouble and delays with rebuilding.”
Brian and Margaret Morris live in the north of town right near the Creswick Creek channel. They escaped the flood waters with only the clothes they were wearing. “We had no time, the water began oozing up under the carpet and boards and then it came under the front door. Firemen had to carry my wife out. I could only just walk in it, the current was that fierce,” Brian, pictured, said.
They spent their first night after the storm at the Doug Lindsay Reserve with the Salvation Army supplying bedding, food and drink. By the following Monday they had secured a place at the Creswick Holiday Park and have been there ever since.
Their home, which suffered considerable damage, is now being worked on. However Brian remains fearful that the next big deluge will wreck it all again because fundamental problems with Creswick’s waterways are not being addressed.
“The pipe under the verge outside our place was blocked with gravel even before this flood. We have another pipe that comes through my easement into the Cushing Street drain and it was blocked so we copped the water from that as well.”
Brian said other waterways such as the one beneath nearby Cambridge Street are unable to disperse into Creswick Creek, which also holds many years worth of gravel and vegetation making another flood event highly likely unless something is done.
“We are still waiting for the waterways to be fixed. That is the big issue. We only have to have another downpour like we had for the same thing to happen again. I even sent a message to the council a month ago to come and talk to me about drainage but I have received no response.”
Council, in a May 24 media release, said it would carry out a significant flood study of the area to assess longer-term impacts with input from residents.
Just such a report was completed in 2012 after the 2010/2011 flood events with $1.4 million allocated for flood mitigation works including creek deepening and widening between Water Street and Nuggetty Gully. Levee systems were added to protect low-lying areas between Water Street and Nuggetty Gully, Semmens Village, North Parade and Creswick Primary School, an additional two culverts under the Clunes Road and Castlemaine Road Bridges and the installation of one way valves on major drains.
While these works have been completed, home owners such as Brian feel that until the Creswick Creek channel is properly cleared, flooding will continue.
Council CEO Bradley Thomas said the council had invested $4 million of government funding (of an estimated $9-10 million required to complete works) in the clean-up and recovery from the January storm event. “Our immediate attention was to support the relief and recovery stages of the emergency and this is progressing well despite the significant amount of damage.”
Mr Thomas said in addition to repairs to infrastructure and necessary upgrade improvements, council had increased drainage capacity with road upgrade project in Pearman Street to respond to community feedback, held multiple community feedback sessions and visited sites with residents to hear concerns, mapped impacted areas reported by the community, inspected and recorded specific details where public infrastructure needed greater attention and advocated to state and federal governments and the insurance peak body.
It had also submitted a funding application for a second stage flood study ($240k), worked with the SES and CMA to update the Municipal Flood Emergency Plan with mitigation measures to better protect the Semmens Court units for the short term and plans to establish a Community Recovery Committee.
“We acknowledge that there are still around 44 people displaced and not able to return to their homes due to the damage, and we appreciate the level of stress this will be placing on families. We are committed to ongoing support and works over the coming months.” Words & main image: Tony Sawrey | Inset: Contributed