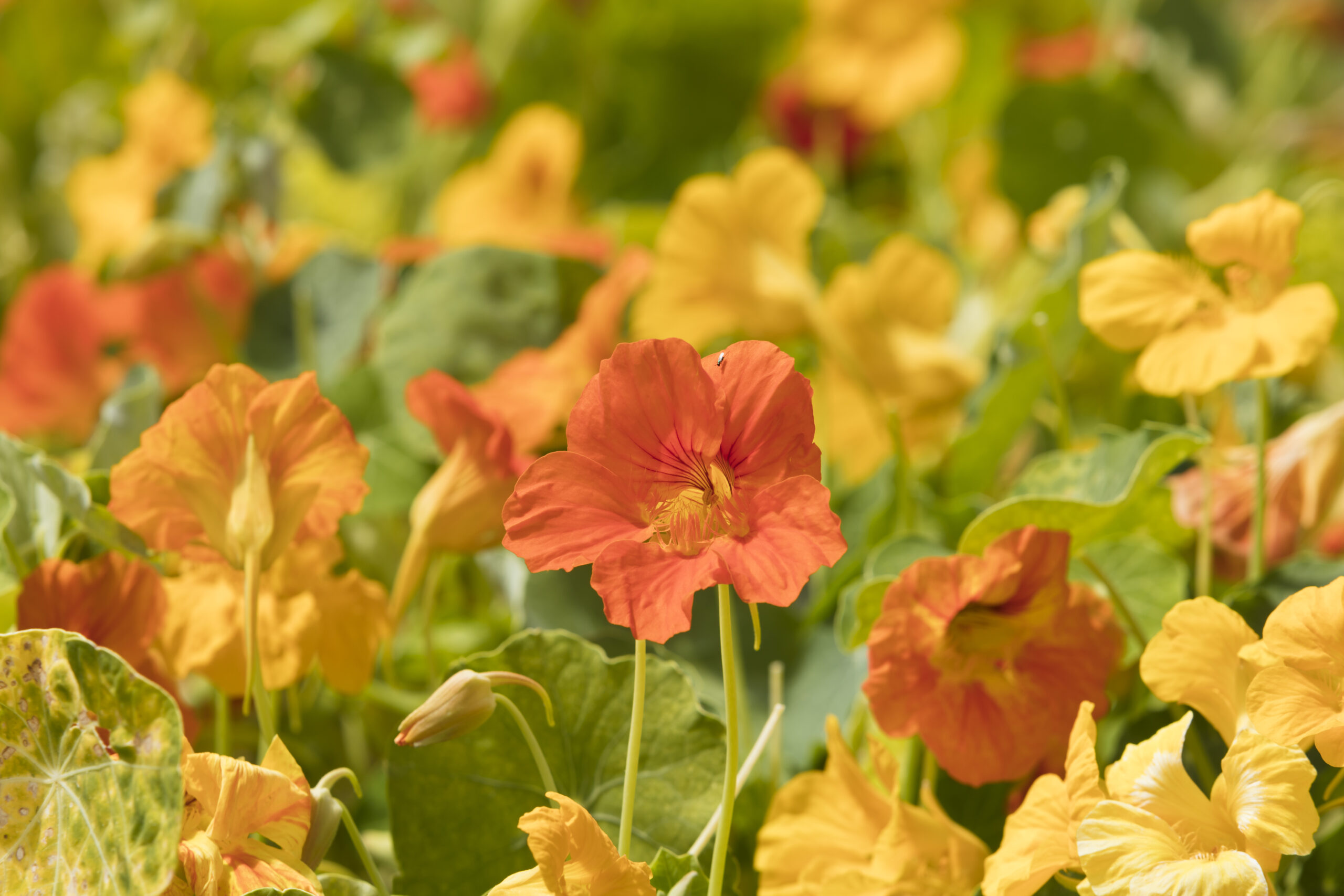 MARCH 18, 2020. This date is stamped into many people’s memories as the day everything shut. Among them is Lauren Richardson, grower of edible flowers in Glenlyon.

As usual, she sent a load to the wholesale market in the Melbourne suburb of Epping, which supplies the nation with flowers, fruit and vegetables. Like most other people Lauren knew of COVID, but of course “it was all happening overseas”.
Next day she rang to see what was happening. “We don’t have another order,” she was told. “We don’t know when there will be another one.”
Six weeks would pass before orders resumed.
With no income she pulled her children out of daycare, which meant she couldn’t work. None of her four staff qualified for Jobkeeper.

“There were lots of empty beds and dead flowers…crops with no market.”
And as if this was not hard enough, her husband David had just finished scheduling the season’s matches for the Football Federation of Australia at its St Kilda Road headquarters when COVID struck. Since then he’s been working at home four hours a day rescheduling in a project that resembles unscrambling an omelette.
For Lauren, the pandemic taught her to diversify and expand her customer base. So she moved into dried edible flowers and syrup, produced from elderflower, roses and lavender.
Diversify is what her family has always done in the six generations they have lived in the Central Highlands. Lauren’s mother’s family is from Leonards Hill and their history includes having a grandfather who helped build the railway line to Daylesford. And when the timber milling was gone, he saw the line pulled up.
Over six generations since the mid-1800s, her family have been christened and married in the Daylesford Uniting Church. She followed this tradition by getting married there in 2018. She and husband David have four-year-old Eve and 18-month-old Louise. The family moved from Glenroy in Melbourne in November 2018, while Lauren’s parents, Glenda and Colin Richardson, were well established in business here. Colin made the first Ned Kelly Wood Heater in his Daylesford Engineering business back in 1984.

Lauren’s path to flower farming was a winding one. She did her BA in arts and science, majoring in anatomy, at Melbourne University, then studied the history and philosophy of science, moving on to a degree in architecture, and finishing one semester short of her MA.
“I always worked in hospitality part-time and had friends with a wholesale fruit and vegetable business. Working with them I saw that there was a market for edible flowers.”
Flowers have been part of food for centuries, with rose petals used in the Middle East to make rosewater and syrups, as well as Turkish Delight, while the ancient Romans ate lavender, roses and violets. Eastern cultures incorporated orange blossom, chamomile and calendula, while edible flowers bloomed as a display of chic in the Victorian era, with nasturtiums, roses and elderflowers being eaten. Asian dishes featured banana blossom and varieties of orchids and chrysanthemum.
A huge revival in edible flowers arose over the last decade, says Lauren.
“I began with viola, marigolds, roses, rockets and peas.”
Apparently the flowers of rocket are much less harsh than the leaves. Then there are coriander flowers.
But not all parts of flowers are edible, she cautions. While the flowers and leaves of elderflowers can be consumed, the leaves and stem are poisonous.
After seven years in her business, Flowerdale, she now grows between 30 and 50 varieties, with viola the most popular and used in cake garnishes or on pancakes in café breakfasts, and even in cocktails.
Herbal flavours are sought after by top restaurants, she says, mentioning the famous Attica in Melbourne and Brae in the Otways near Birregurra. Flavours from sage and pea flowers are popular.
Lauren had always wanted to produce dried edible flowers, so the lockdown saw her growing them for syrups such as elderflower, roses and lavender.
A tour of her garden reveals voluptuous scents from roses, subtle perfumes from others. And an electric fence to keep the hares off a carnation patch. Ducks go for marigolds and cornflowers, apparently, while rosellas prefer the interior of roses.
Back at the house I taste a couple of nasturtium leaves, with a glass of water. Their echo of Japanese wasabi is remarkable.
Lauren tells of an intriguing development in her world, the Daylesford-Macedon Flower Trail. Flower farmers and getaways, among others, joined to promote the region and each other. They hold events such as farm gate sales and workshops, with details at www.consortiumbotanicus.net.au
The consortium wonderfully sets out to “grow, harvest, source, design and celebrate ethical, sustainable, beautiful ‘botanics’ for the cut and edible flower markets… working together to put truly-local, low-tox, bee-friendly flowers in Australia’s hearts, homes, vases, bouquets and boutonnieres!”
That would put a spring in anyone’s step.