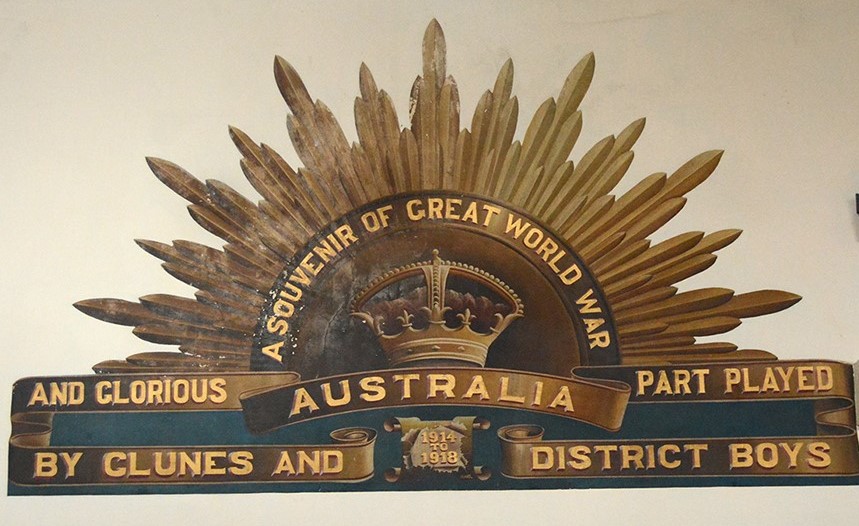 THE Clunes Town Hall and Courthouse is a striking municipal building designed by Percy Oakden. Built in 1872, the distinctive building reflected the prosperity of a gold mining town in its heyday. But this is not a story about the Clunes Town Hall as such, though it is worth mentioning that the grand building has recently had a substantial makeover, returning it to its original glory.

Instead the subject here is Richard Ford, arguably one of the town’s most well known and revered artists. He was born in 1875 and died in 1961 and over the course of a long life he was a council foreman, horticulturist and park curator and later taught woodwork at the Clunes Higher Elementary School. In addition to these many talents he was a prolific painter. Where Ford received his artistic training is unknown but his skills were considerable.

He executed numerous works of Clunes and its surroundings very much in the tradition of English landscape painting, casting the town in a soft bucolic light. An interpretation in great contrast to the many photographs of the period featuring rickety shacks, industrial-scale mining operations and denuded hills. Nonetheless, over the years many people wound up owning a Richard Ford work and there was even one found at the Senior Citizens Centre during its recent revamp which has since been donated to the Clunes Museum.
However, it is the aforementioned Clunes Town Hall which was the recipient of some of his most substantial creations. They came about in the form of a detailed stage proscenium and a war memorial painting, both of which can still be viewed today in the large public meeting room.

A century ago town halls were one of the main social spaces for regional dwellers. There people would gather to dance, listen to music and watch plays. And the proscenium bracketing the stage was as essential as chairs and lights. Generally they featured a painted backdrop, movable wings and a physical proscenium arch. The entire installation then served as the frame into which the audience observed a theatrical performance. By 1916 the time had come to replace the old proscenium and as council foreman, Ford was uniquely placed to offer his skills in the creation of a new one.
The result was spectacular. The backdrop depicted a paved patio bracketed by neo-classical balustrades looking out over a sumptuous lake and dramatic mountains. Four rectangular wings around three metres high featured sturdy oak trees thick with foliage. On their reverse side were framed vignettes of subjects such as native flowers and swaggies by water holes. With the flick of a latch, the stage could go from a European to Australian theme in moments.
Needless to say the council and town loved the final result and many spoke in, “most eulogistic terms of the fine painting executed by Mr Ford,” as reported by the Clunes Guardian and Gazette. In response: “Ford said he could hardly express his feelings. He had done the work to the best of his ability and he was pleased to know that his efforts had been appreciated.”

Six years later a memorial was created in the same space featuring photos of soldiers and nurses who served in the Great War and Ford was able to contribute once again. “In the centre is the representation of a rising sun,” reports the Clunes Guardian and Gazette, “brilliantly and artistically painted by Mr Ford to whom much praise is due for the skill and care which he has bestowed upon the whole work”. A century later, his works remain in good condition. And with the Town Hall refurbishment and restoration works now complete, a new generation of Clunes residents and visitors will have the chance to experience them again in all their glory.

Thanks to James Curzon-Siggers and the Clunes Museum for their assistance with this article.