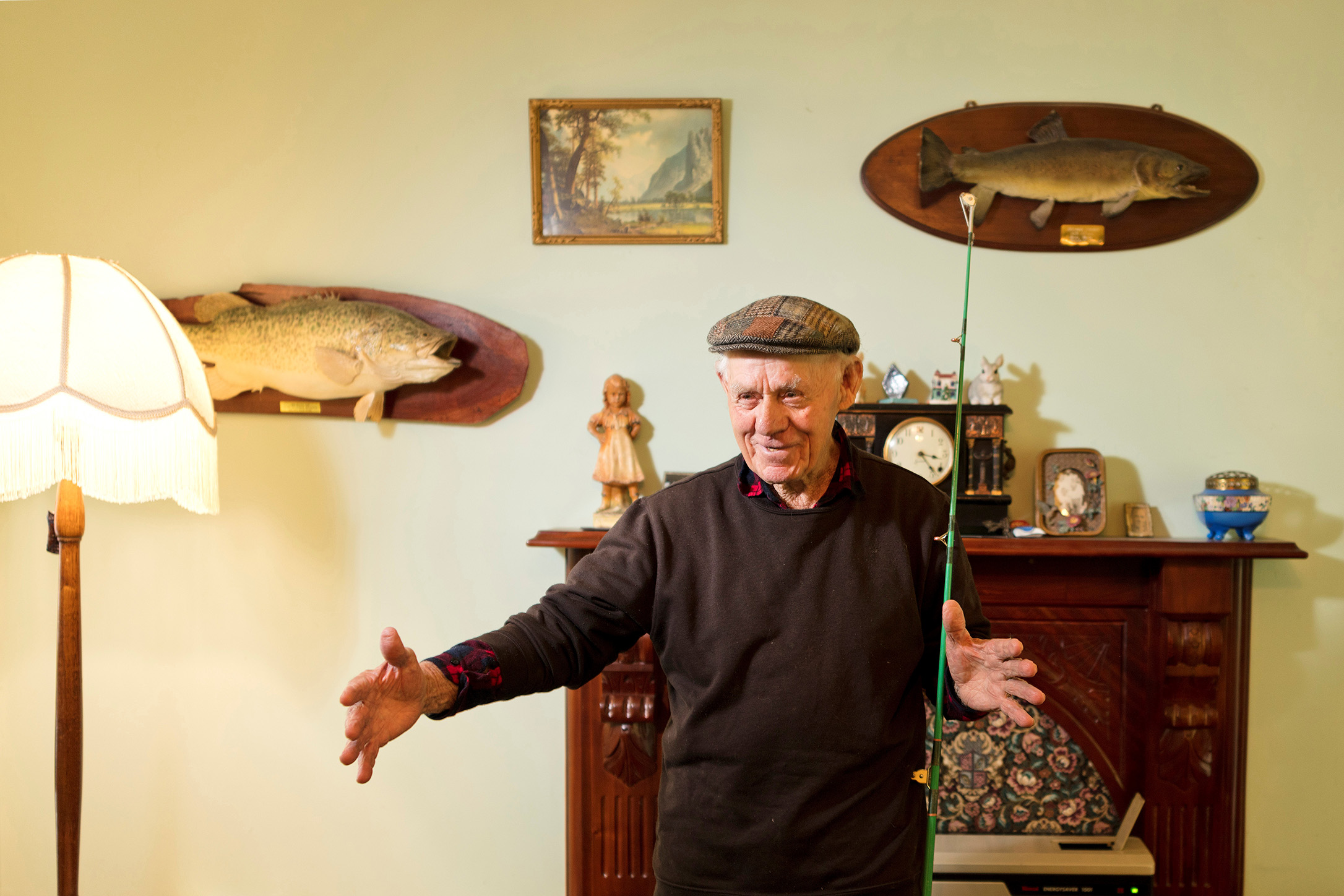 YARNING with Laurie Mitchell starts with the strange disappearance of the name plaque from the Daylesford Angling Club rooms, moves into decades of fishing contests, diverts into a fabulous gold find, and even makes its way to home building a hand-hewn, earthen-floored miner’s hut.

Along the way we find out about using frogs as fish bait, his local paper nom de plume (“Whopper”) and how Angling Club records are not, contrary to his information, with a local couple because both have died. But they do exist, apparently, and should eventually find a home with the Daylesford & District Historical Society, telling the story of a club that was founded in 1919, burnt down with a loss of records and began again in the 1930s. Drought eventually killed it.
Meanwhile, Laurie’s got a cuttings book with snaps of youngsters with actual and whimsical pieces by “Whopper”, who tells of one Ron Chesterman seeing a fish in the Hepburn Lagoon so big his truck wouldn’t carry it. And Jess Hartup, last seen heading down Birches Creek through the willows hanging on to a whopper. Other fishing news was by “Small Fry”, now unknown, who warned in a footnote: “Look out for the Joe Blakes.”
Now 83, Laurie is brimful of stories. He helped run an angling club at Foster in Gippsland before returning in 1972 to the town of his birth. He and his wife Dorothy (“Dot”), who’s now in Hepburn House, had five children, so he set out to expand the local anglers’ club to include juniors. Success led to him becoming president of the Midland Anglers Association.
In this role he set up an annual competition held in the middle of a big dam at Hanging Rock. “A bus driver took a full load of us for nothing in Summer, in about 1972. The first year every kid got a trophy.”
They included a four-year-old girl with her 4 1/2lb trout. “Her father reeled it in. I said, ‘No rules! No regulations!’ and she got top prize.”
Apart from 16 years running a piggery in Gippsland, he’s always lived here, starting the district’s first garbage collection on a $14,000 contract in October 1974.

His father had a farm at Glenlyon and, having a fine voice, always claimed a relationship with another Mitchell, Dame Nellie Melba. Grandad was from Scotland.
After 10 years as club secretary, Laurie gave it away when he had his first heart attack at age 42. He’s had a triple bypass and a couple of stents inserted but still shoots over to Talbot with his metal detector on the hunt for gold.
It’s a hunt that his offspring inherited. He shows a photo of his son, Robert, flanked by two security guards as he shows the 16kg Evening Star, found at night in 1992 among WA saltbush flats at Paddy’s Knob, a steep hill, eight kilometres north of Ora Banda, which is 66km north-west of Kalgoorlie. The fourth largest nugget found in Australia, it sold to a cattle king at auction in Sydney for $845,000 and is now thought to be in Germany. Its discovery sparked a gold rush when the news leaked out a year later.
Robert still hunts for gold from his home in Siberia, a once-abandoned goldfields town 86km north-west of Kalgoorlie. Gold was first found there in the late 1890s.
From gold it’s back to fishing: Laurie and his mates would jump the fence to catch frogs at the Water Trust tank in the Wombat Hill Botanic Gardens (it’s now roofed).
Among the best fishing spots were the Malmsbury and Cairn Curran reservoirs and over at Lauriston. Laurie’s successes are mounted in his living room: a 6lb 10oz trout from Omeo, a 16lb Murray cod caught near Swan Hill and a 4lb yellowbelly from Boundary Bend on the Murray River. There’s also a memento of when Dot won the trophy for the heaviest fish of the year.
Next Laurie shows us the hut he and Dot built. Well air-conditioned, he observes, as the sun shines through spaces in the hand-cut timber. Spread about is rusting gold-mining gear.
To finish, he reveals the art of blackberrying. He would hit the bushes with a bit of timber, forcing the berries into a baby’s bath with holes in its bottom. The bath would be put in a creek to clean the berries, which would fetch $200 to $300 at Ballarat.
Back outside, he shows his big vegie garden as he prepares to visit Dot (they’ve been married for 63 years), always with flowers for the Hepburn House staff.