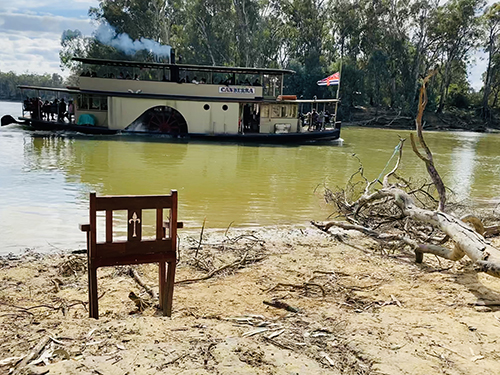 ORIGINALLY known as Hopwood’s Ferry, Echuca was founded by one of the most enterprising characters of the early colonial days, an ex-convict named Henry Hopwood. In 1850 he bought a small punt to transport people and goods across the mighty Murray. Hopwood died in 1869 leaving a thriving town where nothing had existed 16 years earlier, when he built his first slab wood inn.

ORIGINALLY known as Hopwood’s Ferry, Echuca was founded by one of the most enterprising characters of the early colonial days, an ex-convict named Henry Hopwood. In 1850 he bought a small punt to transport people and goods across the mighty Murray. Hopwood died in 1869 leaving a thriving town where nothing had existed 16 years earlier, when he built his first slab wood inn.
On a recent trip to the sister cities of Echuca and Moama we decided to stay in a caravan park. The sort of spot that we normally shun, not because we are snobby, it’s just caravan parks by and large consist of sunset drinks, early dinners, early to bed and the racket of caravanners and children packing up at six in the morning to get on the road.

However, I spotted these almost cantilevered cabins from the bridge that connects the two towns, and swung back for a look at the Moama Riverside Holiday Park and immediately booked into cabin 22. A two-bedroom cabin on the edge of the park for $220 a night with a steamer funnel height view up and down the main river.
I am not taking it for granted as we wander our great southern land again. It was only months ago that I saw a young man sat on the edge of the road crying on the Victorian side of the Murray as police swamped him and ushered him back to NSW. He, probably like all of us, just wanted to see his family and was denied access. Bloody lockdowns.

The Echuca side of the river ticks a lot of the boxes for me. It is steeped in maritime history although I am not much of a fan of the bearded man who goes around and around the block picking up tourists to experience a ride in his horse and cart or other naff tourist attractions like that. But drill down a layer, walk under the side show of the historic village and you find yourself in a world under the wharves, where you appreciate the height and engineering intricacies of the inland wharf necessary for the land of flood and drought.
The walks around the Murray are as long or short as you like. If you want to see another engineering marvel, I suggest a 30-minute car ride to Torrumbarry Weir, where there is a working lock and a lot more interpretive information to get your head around how big and navigable the water system is.
Whether you’re a car buff or not, a visit to the National Holden Motor Museum back in Echuca is great for a nostalgic jaunt down memory lane, however back on the Moama part of the divided megalopolitan area is the Moama Bowls club, a huge sprawling NSW-style club.
It is great for a visit and only about a five minute walk from the caravan park for any meal in the day. Some folks I recognised didn’t seem to have left between meals, choosing the dark serenity and noise of the pokies to the blue skies and serene whistle of the steamboats that ply up and down the river under our balcony. But if that’s your scene, it is there for you in abundance.
A visit to the twin cities wouldn’t be complete without a ride on an old steamer such as the Canberra or Emmylou, with the latter coming back into commission later this year. An hour trip on the former is about $30. The Emmylou does longer overnight trips of two to six nights which, for that sort of diehard riverbank steering and wildlife watching, I would think you would be better off grabbing a few friends, a couple of tonnes of booze and food, and head off on a houseboat with a spa pool bubbling away on the top deck.
Certainly to get a taste of the river cruising (no pun intended) the dinner and lunch cruises on offer looked fabulous. Unfortunately we were a bit time poor and besides already had the best seat in the house back at the cabin which came complete with a BBQ. I couldn’t resist borrowing the words from Darryl Kerrigan: “How’s the serenity?” Images: Kyle Barnes