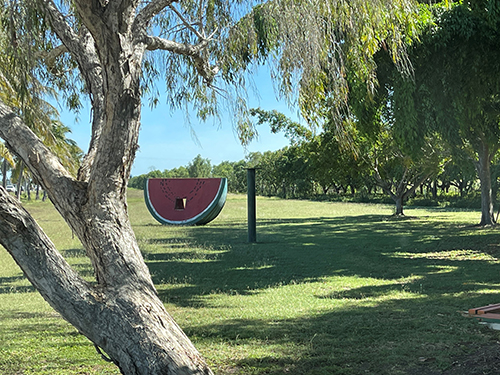 IT MAY be a long way to Tipperary but it’s also a long way from Glenlyon to Cairns. About 4000km. You can apparently do it in four days if you really push yourself but what’s the fun in that. Road trips are about taking it easy, taking in the scenery and chatting to locals. Connecting, breathing, dropping back to a slower pace.

IT MAY be a long way to Tipperary but it’s also a long way from Glenlyon to Cairns. About 4000km. You can apparently do it in four days if you really push yourself but what’s the fun in that. Road trips are about taking it easy, taking in the scenery and chatting to locals. Connecting, breathing, dropping back to a slower pace.
Of course, Kyle and I don’t quite do it like that but we did have a great trip recently. We drove past the original pub with no beer and went into the pub with no wine. But more about that later.
The main gist, the boring bit, is that we drove off, spent six days on the road via Sydney to the Gold Coast, stopped there to put The Local, House.Land.Home.Premium and The Little Local together, and then travelled on another six days to Cairns, sort of along the coast.
The drive to the Gold Coast is pretty easy. Going through Sydney used to be a nightmare but now there is a tunnel and you just go in and pop up out the other side. Lots of trucks, not sure why they don’t use rail, but mostly good drivers.
At the Gold Coast we stayed at Burleigh/Miami – sort of inbetween – in a high rise apartment where we were the only ones still wearing masks in the lifts. But that is OK. If you put a mask on it often stops others getting in. They look a bit scared, like you might have Covid, and then if you just let out a little cough or say sotto voce something like “The RAT test was negative but I’m sure I’m positive” that works well too.
Anyway, we mostly worked there but also took time out to see the latest Top Gun movie. Being still a tad paranoid, we chose a really quiet time, middle of the day, and Gold Class. Of course, when we arrived at the cinema, Gold Class was having a business function and it was heaving. And in the cinema itself there were about 10 people coughing around us. Oh well, the jets were worth the watch. Spoiler alert, don’t read the next sentence if you are yet to see the movie. Kyle thinks the jets could have gone out the same way they went in and avoided the surface to air missiles. After some deliberation, I concur.
Kyle must have also looked very friendly, I walked out of a shop one day to find him holding a dog lead. The owner had to buy needle and thread. WTF?
On the road again and there are lots of roadworks happening above say Gladstone, so you need to factor that in, time wise. As Kyle says in his rant, they are really keen on roadworks that stretch for kilometres. Nothing like the patch-up jobs down our way. I’m thinking about you, piece of road just before the Woodend railway stop.
Mind you, Siri, who I now have talking in a gentle female Irish accent, was pretty good at making roads on the phone orange or red and letting us know the speed limit. There are also a few cars on the side of the road where you know people have had a really bad day. And jackknifed caravans. Keeps your mind from wandering.
Not many kangas but quite a few signs with big and little cows, calves I guess, and then you realise they are live, grazing next to the road with no fences, and you are doing 110km an hour. Bloody hell.
At the start of the trip you do wonder how you are going to pass the time, especially if you have been together as long as us and have run out of things to say, but there are some great podcasts happening now.
We listened to Yeah Na, strange things that have happened on the ABC – like this couple who were both struck by lightning and survived to tell the tale. Their main beef was that they were publishers and of all the interviews they did, no-one mentioned that. So no publicity for their books. Bummer.
Oh, back to podcasts and there’s also the Armchair Expert podcast with comedian/actor Dax Sheppard. Elon Musk was one guest and really interesting although he is quite nutty, and there was also a NZ expert talking about an American cult called NXIVM.
It was really popular with actors apparently but some of them realised it was a scam – after 12 years and being branded with the leaders’ initials. Yep, branded. They kept asking why intelligent people would allow themselves to be branded. Who called them intelligent. Actors not rocket scientists. Not Elon Musk.
And then, when the podcasts get boring, or stop downloading because you have no signal, each country town has its own unique radio broadcasting. We listened to one for a while until we realised it was a preachy thing. Nothing wrong with that but it wasn’t even a Sunday. Another one, out of Rockhampton, had the female of the broadcasting pair screaming as she gave out ferry trips. People must love those ferries.
One of the best things on the road is talking to locals. We popped into the Royal Hotel at Mt Larcom just out of Gladstone and chatted with a woman working at the bar. She was a long time local and said she thought of the lyrics of Glen Campbell’s Rhinestone Cowboy when she cleaned the pub.
I’ve been walkin’ these streets so long
Singin’ the same old song
I know every crack in these dirty sidewalks of Broadway
“I know every crack in every tile in this pub,” she said. Nice woman, lots of tatts.
Then there was Carlon’s Hotel in Sarina, up from Rockhampton. We had a sandwich at a bakery, and decided to pop into the pub next door. The bar was round and inside was a huge steel vat thing, with the taps running off it and fridges inside.

There was a young woman behind the bar, and two blokes in front. One with a cane looking a bit old wizardy and one with your typical orange work shirt. They all looked as we walked in, in a surprised way, and I walked to the bar and asked: “Would you have a chardonnay?” And the woman said: “I don’t think so.” She then asked the cane-wielding bloke if they had any chardonnay and he said: “Might be a bottle in the back fridge.” But as the woman got there he added: “Nah, we don’t have any.”
And we all laughed. Not so much ha ha, more WTF? I said: “Must be a beer pub.” She said, “I have only sold four glasses since I started three months ago.” And he said: “It’s a beer and spirits pub, you’ll need to review your drinking.” Then pointed us in the direction of the hotel next door. They did have wine and I told my story to the woman behind that bar. “How funny,” she said, ‘You’d think they’d keep one bottle, but I guess it would go off after a bit.” Very understanding.
We also pulled into Marlborough and had a look through the local museum. The woman there was really friendly and I ended up buying a pendant and ring made from chrysophrase, also known as Australian jade. And then I bought two jars of preserves. Janet, who made them, apparently took home every award in the last show.

Finally, a little diversion to Clairview where we found the most idyllic seaside village ever, complete with a combined op shop and tearoom. We shared a scone topped with jam we chose from the preserves for sale, and a cup of coffee and tea. My tea was a shop-bought lemon and ginger dropped in hot water, but the woman doing the scones, called on another woman to help “with the tea”. A group effort and a great break.
Oh, another nice bit was when Kyle “blew” his thong just as he walked into a pub in Gladstone. He showed the broken footwear to the young barman and said, joking, “don’t have a spare pair of thongs, do you?”. To his surprise the bloke disappeared and returned with a pair of size 11, yellow Bundaberg Rum-themed thongs. Free. The bloke said Kyle would just have to start drinking rum instead of beer. Fair enough.

There are also lots of “big things” on the road which aren’t really that big. Big watermelon, above, big crab, big hamburger, big mango. But, you know, bigger than the real thing, so it’s all relative.
Anyway, we are in Cairns now and working out our trip home. It was all about the road trip, but it is a long way, so the ute gets popped on a truck and we fly home. Four hours tops. See you soon.