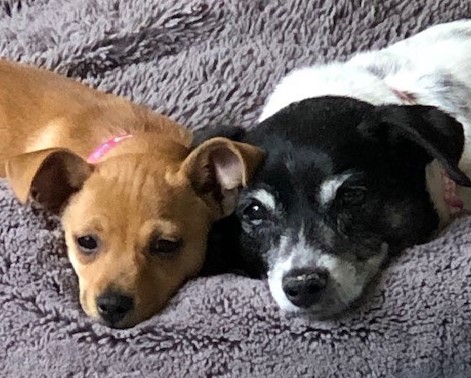 WE VERY nearly lost our Scout last week. Scout is a smooth-haired Jack Russell terrier. She came into our lives in 2003 - she was a puppy when we bought her in a pet shop in Woodend.

We’d gone into Woodend one Saturday to shop. We’d been talking about finding a companion for our dog Gizmo – you know; a pet, for our dog. We wandered into the pet store and there she was: bright, energetic and friendly – just what you want from a sales clerk. The puppy was fine too. We did no research, asked no questions, just said, “we’ll have her” (the puppy).
Turns out her breed tends to be smart and stubborn, which makes them difficult to train – a month of puppy school in Newstead confirmed this to be true.
Carol and I have form in this spur-of-the moment pet buying.
In 2001 we’d moved into our home in Wheatsheaf, making the transition from holiday-house owners to full-time residents.
That same year we attended the Bendigo Heritage Wine Festival, in which local winemakers set up inside some of the city’s beautiful old buildings and visitors walk through the streets enjoying the delights of the region. Passing Clouds winery had their tasting in one of the old trams as it rattled around the town – fantastic!
There were four of us and we’d become well acquainted with the region’s wines. While walking to our next destination, we stopped to look in the window of a pet shop – see the pattern emerging?
The puppy in the front window looked as if he’d been groomed using fingernail clippers. He had gooey eyes, upright ears and a crooked face. He captured our hearts in an instant, although we resisted his charms and continued our wine tasting.
But we didn’t forget him. One of our wine-tasting friends pestered us about him the remainder of the day and well into the night. So, the next morning, we drove back to Bendigo and bought the dog.
He hadn’t been well cared for in the pet shop. Apart from the miserable grooming, he hadn’t been fed properly. He was tiny, sitting easily in the cupped palms of two hands. His teeth were bad and his eyes were infected. But he had a magical personality and, with those funny ears, we immediately knew his name was Gizmo, from a character in the Gremlins movie.
At the time, Carol and I were commuting to Melbourne, via V/Line from Kyneton, for work, five days a week, and we felt bad leaving Gizmo home alone for that many hours a day. Which is where Scout enters the story.
We cleaned up Gizmo and put him on a healthy diet – he ate like a pig but never grew much bigger than a mid-size chihuahua. He was well-mannered, had a lion’s heart, but was frail. Scout was a Jack Russell through and through: strong, fast, wiry, stubborn; but Gizmo ruled her pack, and they made a great team.
Over the years, Emma Tomkins from Hepburn Veterinary Clinic did a superb job helping us keep Gizmo happy, but he wasn’t a robust dog and in 2016 we lost him; he was in terrible pain from pancreatitis. Even now, I am crying as I type this, remembering how Carol held him in her arms while Emma gently administered the final injection.
Scout seemed to be in shock without him for a while but we tried to compensate with daily walks around the track at the Glenlyon recreation reserve.
In 2018 we decided to move back to California, after more than 30 years in Australia. My parents are quite old now, and it’s time for me to step up and be here for them.
Scout flew here in a large, custom-built crate, and soon settled into her new life, where the dogs have funny accents, pronouncing the hard “R” in bark.
We’ve been here more than two years. Scout is 17 and has slowed considerably. Her eyesight is poor – she has cataracts – and her hearing is greatly diminished. She sleeps 18 hours a day. Two weeks ago she had a sick spell and had trouble standing, but she came good. Then, last week, she was again sick and shaking, and seemed to be having some pain.
We’ve been fortunate to find a good vet here, so we took Scout to see her – her name is Nina. We were prepared for this to be Scout’s time. But Nina examined Scout, caressed and cuddled her, and declared that her heart and lungs remain strong – she comes from good Aussie stock, after all. Nina devised a strict diet for Scout and sent her home.
So now Scout has deposited a tidy package on the lawn and is romping around the yard – it always makes her feel good to leave one of these fragrant piles. Last year we bought a puppy for Scout – her name is Joey, because she looked like a baby kangaroo when we first brought her home. She and Scout play, groom each others’ ears, and are great mates.
Thus, life goes on, in California.