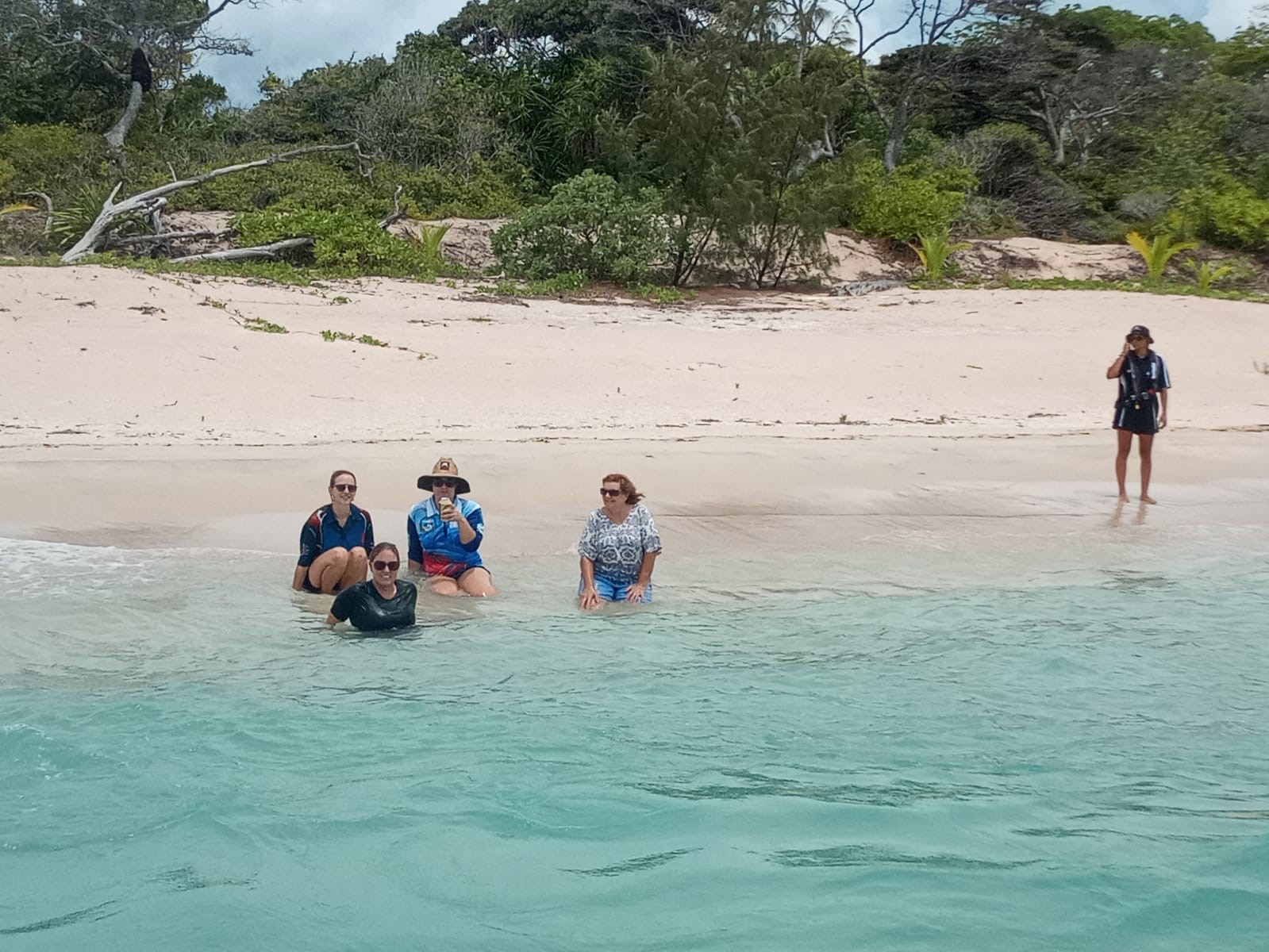 April 11th, 2022Vicki on Team Vaccination at the Top End

MOST people take long service leave to get away from work. Not so Vicki Sundblom.

MOST people take long service leave to get away from work. Not so Vicki Sundblom.
The 60-year-old, a nurse from Little Hampton who can usually be found working at any of Springs Medical Clinic’s three campuses, was on a camping holiday up north with her husband Owen, 57.

“We were on the Cape (York), up the top end and were out fishing on the beach when we ran into a couple of women. I asked them if they were catching anything and it turned out they were nurses and were part of a team doing vaccinations up the top end.
“They said their team had started out with about 30 nurses but with some of the graduates finding jobs, it had dwindled to about 15. We had been doing vaccinations before I left and I thought ‘I’ll have go at that’, rang the number and off I went.

Five months
“I started on August 16 and finished about a week before Christmas. Pretty near five months. It was pretty full on and I was pooped by the time I finished. Everyone else on the teams lived in Queensland so they could take a week off and go home, but if I went home I wouldn’t be able to come back up, so I just kept working.”

Along with working on the Cape at communities including Bamaga and Seisia, Vicki also spent a lot of time on the Torres Strait Islands including Mabuiag, Badu, Yam and Coconut islands. She also went “south” to Weipa and Cooktown. “In Weipa we vaccinated out of the storm surge shelter and in Cooktown we tried many places to try to get the rates up – we vaccinated out of the local school, sports centre and also out of the local pub, with mixed results, until the announcement was made that you had to be vaccinated to go to the pub or work, then we were inundated.”

Banana farms
The team also found themselves at Lakelands Downs (aka Lakeland) where they headed to a number of banana farms. “At one farm we vaccinated 180 workers most of whom were from the islands of Samoa and Tonga and very keen to get their vaccinations so they could go home as most had been stuck there for two years and unable to see their families.”
Vicki said days varied. Island work often meant hopping on small planes every couple of days, pretty much living on two-minute noodles or very plain food that “didn’t matter if it got squashed”.
But for one two-week period they were ferried around on a yacht and sent on tenders to each island each day. Best of all the yacht came with a chef. “That was really wonderful, the food was amazing and it was lovely to get back on that yacht at the end of the day.”
But like anywhere in the world, there were people who were not keen to roll up their sleeves. Vicki blames social media but also the fact that the communities were yet to see Covid in real life.

It’s not a real thing
“There was a lot of disbelief that it was a real thing, or that it had a microchip in the vaccine, social media really destroyed it (getting the vaccine) for so many people. In one community we had a minister come to the clinic and tell people that if they got the vaccine they would go to hell and that God would protect them. We had such a big job telling people that was rubbish and God was protecting them by giving us brains so we could make the vaccine. Others thought the government would close the Cape again to protect them, like they did at the start of Covid. We had to explain that was not going to happen again. It was really challenging in some places.
“But, in one Aboriginal community, Prompuraaw, which was really isolated, we got 100 per cent double doses done. That was because one of our team leaders had been a health nurse there for 11 years, so they knew her and trusted her. There was a lot of work done by the community health centres, they would often go out and bring people to us or take us to people’s home. A lot of work went into the program.”

Time to go home
Vicki said as the wet season loomed, even though they were thankfully not having to wear PPE gear, and the heat became unbearable, she decided she was done but left pleased she had put her hand up.
“It was a real eye-opener in how spoilt we are down here in so many ways. Just with the supermarkets – they have great fruit and veg, but then the tourists go through and buy everything up and the locals are left with the crap. And while the food options were better than what I thought they would be, they are nothing like we expect here. But they were all wonderful people, very gentle and very appreciative.”
So Vicki returned to Little Hampton and Owen, a Department of Environment, Land, Water and Planning staffer, who had decided not to stay up north and headed back home with their camper trailer to “winter and lockdowns and storm clean-up”.
“We left before the storm and our kids sent us photos and we just thought ‘that can’t be right’ and for DELWP staff it was terrible. The Wombat (Forest) is their bush and it was just awful for them all.”

A nursing career
Vicki is also back at Springs, where she continues into her 15th year of nursing. “I came to nursing when I was 45. My dad had a debilitating illness and was high care for the last 10 years and I saw how good our district nurses were during that time. They were fantastic and I saw the difference it made having someone who knew what they were doing, and I thought, ‘I can give that a crack’.
“Before that I had worked in areas as diverse as shearing sheds and banks in Melbourne and Queensland, but I really enjoy being a nurse and helping people.”
Words: Donna Kelly | Images: Contributed