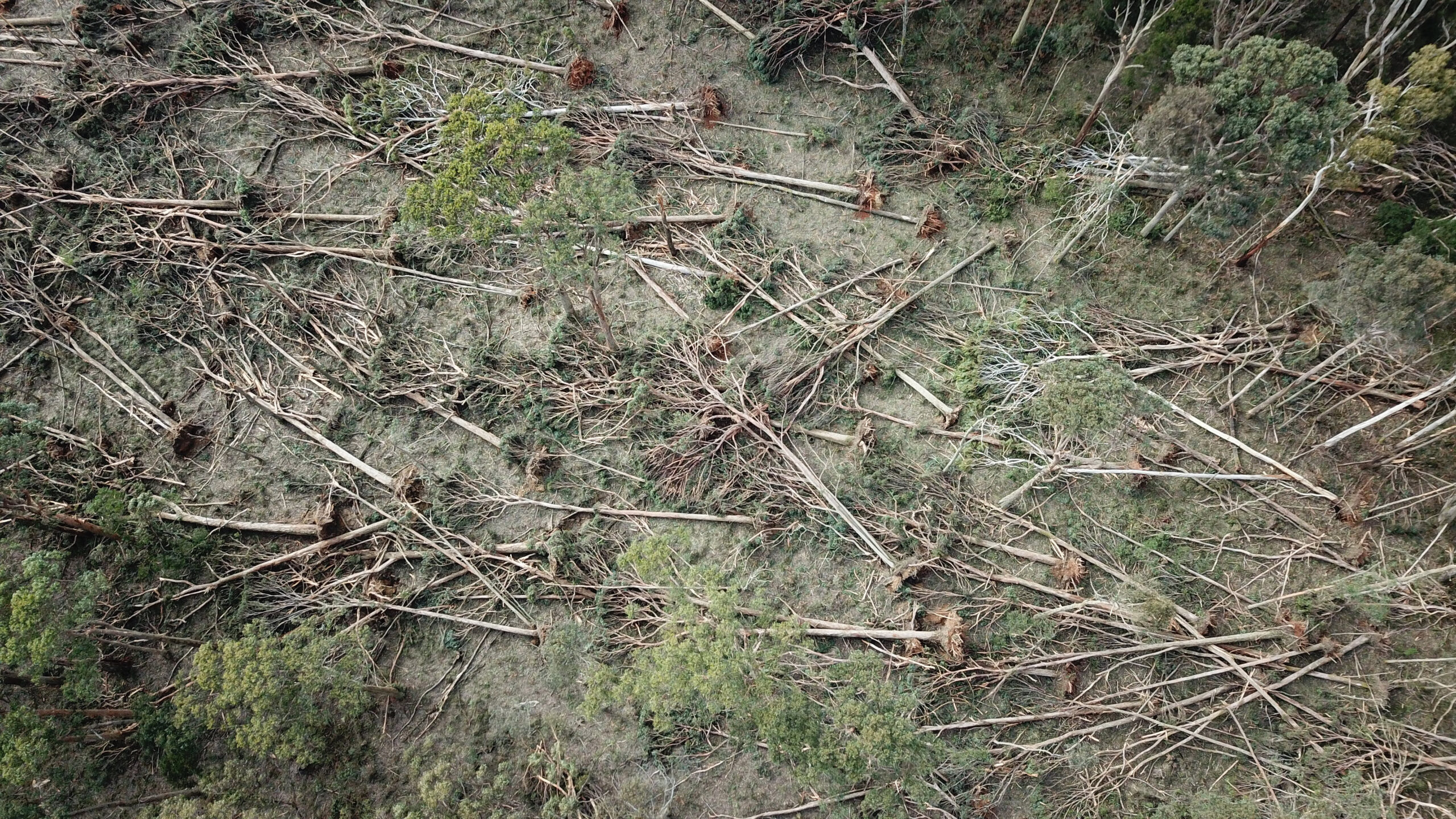 June 19th, 2021Communities rally together after the storm

THE great storm of June 9/10 will go down in history as one of the most devastating events in the Central Highlands. Thousands of trees came down, crashing onto homes, cars, sheds, fences and powerlines. More continue to fall as people deal with the aftermath and the clean-up.

THE great storm of June 9/10 will go down in history as one of the most devastating events in the Central Highlands. Thousands of trees came down, crashing onto homes, cars, sheds, fences and powerlines. More continue to fall as people deal with the aftermath and the clean-up.
Luckily no-one was killed or injured but many people have harrowing stories to tell. In most regions though, there are also tales of community support and strength, and looking to rebuild as soon as possible.
Korweinguboora’s Ross Redwin lost his home but says he is intent on looking forward and returning to his beloved community as soon as possible. Meanwhile, Daylesford Spa Country Railway has been struck a blow with possibly 1000 trees down on its line. But president Stuart Smithwick says it will take more than a storm to stop its volunteers from getting up and running again. Meanwhile Hepburn Shire Mayor Lesley Hewitt says the council is doing what it can to help with the clean up. Mr Redwin, Mr Smithwick and Cr Hewitt spoke with Donna Kelly.

Individuals
ROSS Redwin was asleep in his Korweinguboora home on Thursday morning when he was woken by “a thunderous crash” and got up to investigate.

He was just about to step outside when his 14-year-old daughter Sam rang to say she was trapped in her bedroom. A tree had crashed onto the house, bringing down part of the roof. The teenager had woken to broken plaster and branches above her. Ross helped her make her way out and then went and woke 16-year-old son Herbert.
The trio then moved to the lounge/kitchen area where they sat as more trees fell onto the house, ripping off fascia boards and gutters and destroying the front verandah. It was then Ross made the decision to leave the house for safety, something he says, in hindsight, was probably the wrong thing to do.
“We couldn’t get down the driveway because of the trees so we had a quick conversation and decided we were going to walk to friends of ours who live about 2km down the road. I didn’t think there were many options but it was scary as hell.
“It was the middle of the night and we had to climb over seven or eight trees just to get out of the forested area around our house, and we could hear even more trees crashing down around us but we didn’t know where they were because our torches didn’t go that far.
“My daughter kept having panic attacks, which was perfectly understandable, and I had to stop every five minutes to soothe her down and then another tree would crash down. It was really, really scary.”
Ross, Sam and Herbert finally arrived at their neighbour’s home at 3am and were greeted with warm drinks, food and a bed. “Greg and Donna were just wonderful. We chose their place because there are no trees around their house and thought it would be reasonably safe but they were just so good to us, it was unbelievable.
“In hindsight, we probably would have been better staying in the house that night. We took an enormous risk walking through that part of the forest but I was worried that the house would not be left standing and we would be killed.”
Ross said Moorabool Shire Council got in touch with him on Friday, after phone issues, and put a notice to vacate on the house, while his insurance company had provided emergency accommodation.

“The council was terrific. I was really impressed with how quickly they got onto us and the range of things they could offer us.”
Ross said while he had had a few sleepless nights the trio were looking forward to getting back into his home as soon as possible. “You can’t keep looking backwards, you have to make a decision to look forward. You can ask, ‘why us?’ but it doesn’t matter why, what matters is what we do tomorrow, not what happened yesterday.
“And I love this community. On Friday (June 11) we couldn’t get out because of all the trees down. But people just got together and there were about 20 blokes out there with chainsaws and tractors and they just cleared the roads themselves. A real act of community spirit. I bought in Lyonville in 1989 and have lived around here ever since. I moved to Korweingi in 2013. I love the area, I love the people. It is a wonderful place to live and I feel so lucky to be a part of this community.”

Organisations
IT’S already been a tough 18 months for the historic Daylesford Spa Country Railway with Covid restrictions and lockdowns affecting its main fundraiser, the Sunday Market.

But the June 9/10 storm has wreaked unbelievable devastation with between 400 and 1000 trees down on the track between Musk and Bullarto – and even more alongside waiting to fall in the next gust of wind.
President Stuart Smithwick said the state of the track was “overwhelming”.

“I have walked through the corridor a couple of times, if you call it walking, it’s pretty challenging, and there is no obvious damage to the track but you can’t actually see the sleepers in some places, they are covered with trees.”
Mr Smithwick said the track between Daylesford and the relatively new station at Musk had not been so heavily impacted and the trains should be running again within a few weeks. The rest of the track, to Bullarto, could take months, he said.
“We are currently in discussion with VicTrack, our landlord, a state government agency, and hopefully they come to the party and give us some support, whether that is working with other government agencies or Hepburn Shire. It is beyond the capacity of our volunteers. We are going to need heavy equipment and people who know how to do forestry to get in there and clean up the mess.

“The other thing is finding somewhere for all that timber to go. It would not make any sense to leave it laying on the ground, it would be a massive fire risk along the corridor.”
Mr Smithwick said while the storm damage was disappointing for volunteers, the railway would survive. “Generally, when we have had a crisis we always come back bigger and better, it makes us more resilient and other opportunities often arrive in the process. We also have great local support, most people have been on the train at least once in their lifetime or come to the Sunday Market for their fresh produce.
“We’ve been doing it over 40 years, so I think there is going to have to be a worldwide catastrophe to close this place down. Bigger than a pandemic and certainly bigger than a storm.”

And from the shires
HEPBURN Shire Council Mayor Cr Lesley Hewitt said council was now at the stage of recovering and were working out exactly what the damage was, how much it was going to cost and how to deal with it.
“Council staff are meeting with various agencies around the state to get an understanding of what help is available to residents and property owners and we will make that information available as soon as we know what that is and how to help people apply for it. Council staff have also been cleaning up the roads and are working with organisations to see how the public can safely access the wood.”

Cr Hewitt said an extension to the current June 27 cutoff for free green waste disposal at all transfer stations was under consideration.
Link: www.hepburn.vic.gov.au/storm-update/

MOORABOOL Shire Council CEO Derek Madden, in an emailed response to calls to The Local from Korweinguboora and neighbouring community members expressing anger at the shire’s lack of response, said there was impact across most of the shire “so as fast as contractors and works crews could clean up, more trees were falling”.
“Some dangerous trees were taking five hours to remove with two crews and contractors. Springbank Road had so many trees down and had cars crushed – this road took up most of one day. Greenhills Road had 30 trees over most it. Moorabool West Road in Gordon on Thursday and Friday had eight trees down and when access was cleared and crews and contractors tried to leave, another six trees came down.
“Council staff made phone calls to 58 residents in Korweinguboora on Saturday, some calls lasting 30-40 minutes each. This was in addition to meetings in Blackwood where power and communications remained unresolved in some instances until Monday evening. Due to Covid-19 restrictions, a physical relief centre is the last option. Hepburn Shire opened a relief centre for Trentham because they were cut off completely with no access in or out of the township.
“We will take learnings from this event and have a look at how we can improve our services and procedures. We are committed to supporting all communities across the shire.”

If you are struggling with any personal issues support is available from:
Central Highlands Rural Health social worker at Trentham – 5321 6550
The Victorian Council of Churches Emergencies Ministry – www.vccem.org.au/services/personal-support/ or 9654 1736
Beyond Blue – www.beyondblue.org.au or 1300 224 636