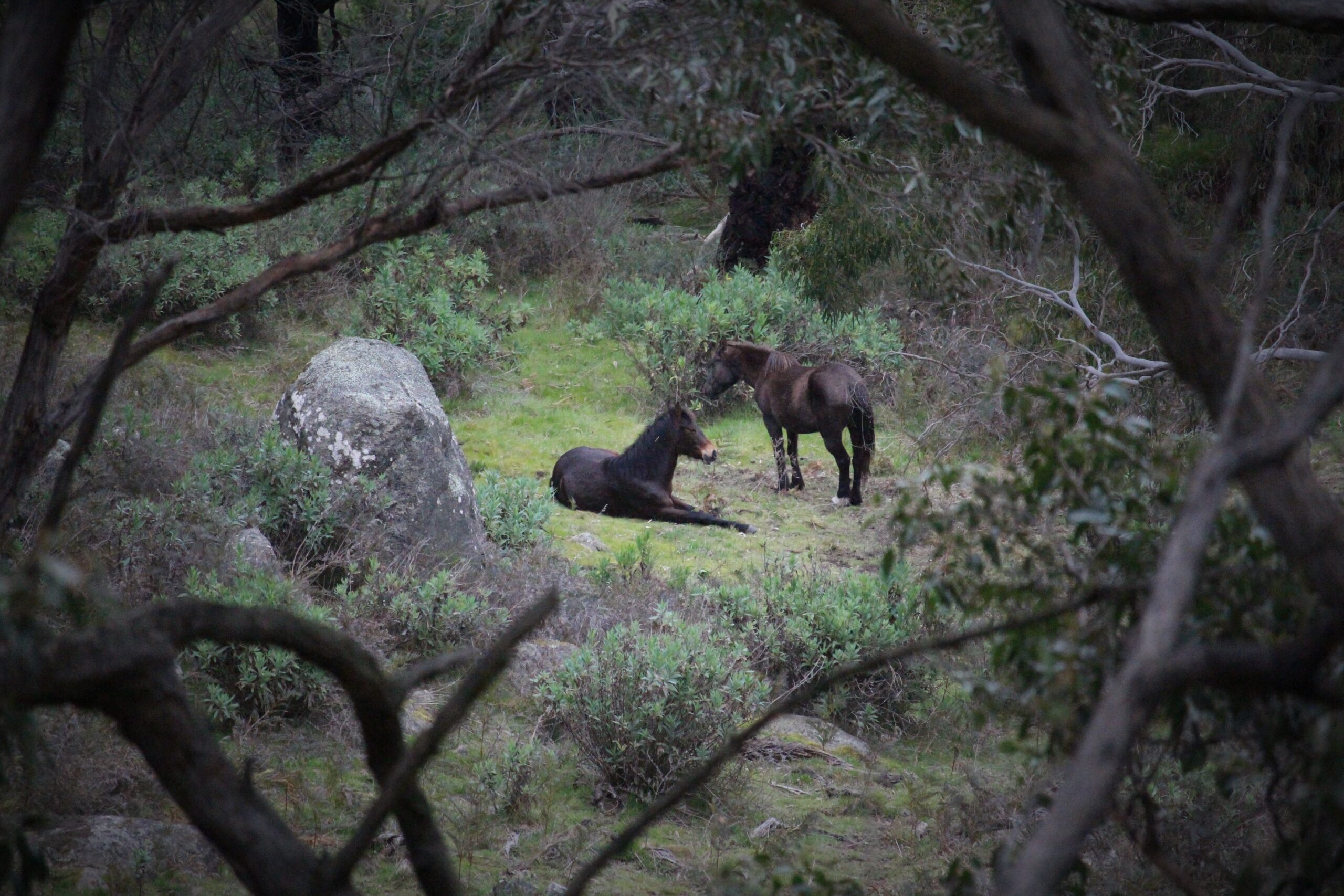 THE Rolling Stones wrote a song about them and now Clunes' own resident Leslie Scott has her own incredible story about wild horses that became the focus of her life during COVID.

The story is so fascinating, the photographer has been thrust into the spotlight with media outlets from across the country keen to share this remarkable story about two horses, a local and an eight-month journey inspired by a love of horses and a need to save them. There’s even been talk of a movie.

Leslie, like many in the small tight-knit community, had heard whispers of wild horse sightings in the remote area of bushland at Mount Beckworth. Curious and concerned, Leslie began making daily trips to a section of the mountain rarely visited due to its ruggedness.
“It all started in April last year when there were rumours going around about the wild horses. A friend of a friend apparently spotted them so I became intrigued. I spend a lot of time in the area taking photos, riding horses and hiking but the area I started going into was on the south side of the mountain which is a part not frequented often by people,” she said.
“I had time on my hands like many people, as COVID had meant I wasn’t working my normal 9 to 5 job. So, the start of my journey began with a sighting of fresh manure and hoof marks but no horseshoe marks. I began going back to the area every day and I continued to follow the tracks. At one stage I looked at my Fitbit and had walked 16 kilometres around the rugged terrain,” she said.

“Then I spotted them. They were tucked away in a plateau on the side of the mountain. I was simply amazed and so many thoughts were running through my mind. Were they domestic horses that had gotten out, had they been dumped?”
Leslie quietly approached the horses from a distance and they spotted her.
“They were on to me and as soon as they saw me coming, they bolted. I realised then that they weren’t domesticated horses. The area is known for hunting and I was so worried that the horses would become shooting targets. At that stage I made the decision to do whatever I could to get the horses to safety. I named them Milo, the colt, and Lucy the mare,” she said.
Given Leslie has been around horses her entire life, she knew routine was key in her quest to help the horses.
“My father always had horses so I never had to ask for one and I actually got my first pony when I was about five. Horses like predictability and routine. I started going to the mountain to get the horses used to me at the same time every day, and I’d sit in the same spot near where they liked to hang out. I called it base camp,” she said.
“Two months in, I was sitting under a pine tree and the colt, Milo, gently came up and sat down beside me. At first, I was a little worried as it could have been dangerous. When he sat down with me it was simply overwhelming. All this time and now I’d been accepted into their herd.
“This was cemented when Lucy the mare decided to join us. They became a major part of my daily life. Horses are like mirrors into your soul. They know if your intentions are good or bad and are able to read signs if danger is near,” she said.
But about five months into her journey, Leslie had lost all contact and sightings of the horses. “I went in morning and night to try and find the horses. I had no idea where they were and I was getting more worried by the minute. I remember sitting on a boulder and just breaking down and being so overwhelmed, thinking I’d bitten off more than I could chew. At that moment a robin redbreast sat on a branch very close to me and I knew I had to snap out of it and stay focused. And so I got up and continued searching,” she said.
“On the sixth day they returned to base camp and our relationship continued, I was so happy to see them and they certainly seemed happy to see me” she said.
“The horses were drinking from a spring-fed well but the water was running low with the hot temperatures so I started carting in 100 litres a day with the help of my husband and a friend. They were getting more comfortable and confident around me but I knew I couldn’t get a float in to take them off the mountain due to the terrain.”
With the water drying up, the horses starting roaming further looking for water and started jumping the fence onto an adjoining farm to drink from the trough. This gave Leslie the perfect opportunity to set a yard around that trough to safely and securely contain the horses.
“Whilst they were in the bush, I began teaching Milo how to move his hind quarters at liberty, meaning without being haltered. He was curious and interested in learning. This helped immensely when it came to getting them on the float and moving them to safety at the Victorian Brumby Association. On Valentine’s Day, I managed to get the ponies into the yard for their regular drink and hay, and I calmly closed the gate. After nearly eight months I finally had the ponies secured,” she said.
Leslie engaged Colleen O’Brien, the president of the association in Glenlogie to assist in their ongoing care and also provide a safe place for them.
For Leslie, the horses are still a major part of her life and will always have a special place in her heart. The day after the horses were safely transported off the mountain the enormity of the journey and a bit of relief overwhelmed Leslie.
“I was a blubbering mess; I couldn’t talk to anyone or see anyone. I hiked in to base camp to get some closure. It was so lonely in there without Milo and Lucy. I don’t think I will ever know how Lucy and Milo came to being on the mountain, and it will always be in the back of my mind. I think it will remain a mystery for the rest of my life.”